Where is a Sleep Guru When You Need One?

When my now 10 month old was only 2 months old he slept like nobody’s business.  He would go to sleep around 11 pm and not wake until 5 am, nurse for a bit and go back to sleep for another few hours.  I still like between 8 and 9 hours of solid sleep myself, but it was doable.  Then somewhere between 5 and 6 months Quinlan decided (well at least his body decided) that it was time to actually start pushing out some teeth.  They take forever and come in 1 at a time.  They must also hurt like a son-of-a-bitch.  At least this is my inference because of the waking and general crankiness.  Just so you know, the waking happens between every 1.5 to 3 hours.  Quinlan usually gets his biggest chunk of sleep from 7:30 pm till somewhere between 11 pm to 2 am.  Unfortunately I hardly get to sleep before 11 pm at the earliest.  It is usually closer to 11:30 or midnight.

Quinlan is still not much of a napper unless he is attached to the breast, in the stroller (moving), in the car (also moving) or lying on my lap on the nursing pillow.  This is not a good thing either.  About the only good thing I took away from the Weissbluth book was figuring out your child’s tiredness signals.  At least with this Quinlan shows them much better than Aidan ever did.  These signals are what told us that Quinlan needs to be going down to bed at around 6:45-7:00 pm.  If we push the time it is harder to get him to nurse to sleep, though Anthony can usually lie down with him and get him over the edge to sleep. 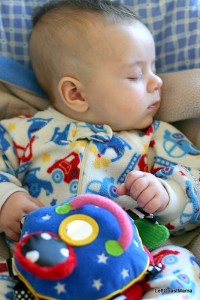 So with Quinlan waking so many time during the night now Anthony and I are incredibly sleep deprived.  I have a hard time getting back to sleep especially if I get up to soothe, feed and generally move Quinlan back to sleep in his crib.  I will do this for the first session but after a while Quinlan ends up in the bed with us.  Neither Anthony or I sleep well with Quinlan in the bed.  He doesn’t sleep for longer periods, we just don’t need to have the extra step of going into the boys’ room to get him.  He has started shunning the soother (in the wee hours) and will cry when Anthony tries to soothe him.  I am at my wit’s end.

Before we get any comments about this, we don’t want to keep co-sleeping and we have no intention of ever trying Cry It Out ever again.  It was horrific for everyone when we tried it the Weissbluth way and didn’t work except to make it that much harder to get Aidan to sleep at all.  We will not try it for Quinlan and because we need to have the boys share a room it isn’t something that is at all practical either.

I will be checking out a number of sleep books from the library and some twitter friends have promised to lend me some as well.  Watch the blog for updates and reviews of the sleep books and training methods.  Maybe there is something we can do with the child who stands up the nanosecond he stirs.

4 Responses to Where is a Sleep Guru When You Need One?