Some Things Aren’t Any Easier the Second Time

I am well aware that Quinlan is his own little man and in a lot of ways totally different than his brother. I love that Quinlan share his brother’s sense of curiosity. I am a little less enthused that he shares Aidan’s and let’s face it, mine and Anthony’s, stubbornness and inability to do things on anyone else’s timetable. 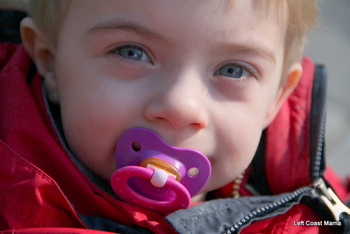 His attachement to the soother is another blog post altogether.

With Aidan the big issues were sleep in the beginning, and toilet training. Of course Quinlan came along and there was a regression in any progress we made and I was sure that he would never be trained. One thing that was never a problem, or even a real worry with Aidan was transitioning from the crib to a bed. It happened because we needed to turn the crib into a toddler bed after part or the crib rail broke. He didn’t get out of his bed at all. He went happily to sleep and in the morning he slept late and called for one of us when he wanted to get up. It got to the point that we WANTED him to get out of bed on his own.

Quinlan is being as stubborn about the toilet training as Aidan ever was. I thought in the beginning that he would be a breeze compared to Aidan. Not so, if anything he is more stubborn. Quinlan has a sense of when he goes and he tells us right after or while he is doing his business that he wants a diaper change. He can hold for long periods of time and there are a number of nights when he wakes up dry and then REFUSES to go on the toilet. Anthony had him on the toilet one morning for almost 15 minutes before he let go. I am not sure how to proceed at this point. He doesn’t want big boy underwear and our rental carpets are bad enough without adding a toddler running around naked. 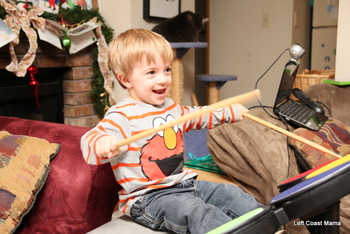 Me Play Drums By Myself!

I am not sure about  transitioning  Quinlan from the crib to a bed. I think Anthony and I are scared about what may happen, rather than what will happen. Will Quinlan be a monster to put down for a nap or to bed at night? Anthony and I are afraid to try at this point, though we really need to get a move on if we want him in a bed by the time we move, whenever that might actually be. So we are conflicted, do we change the crib to the toddler bed and go for it? Do we keep the crib as an alternative and use the bed under Aidan’s? I have no idea.