Wii and a haircut

Posted on November 19, 2006 by Gwen
This weekend I was working in the kitchen at our church’s annual Christmas Bazaar so Anthony had Aidan for most of Saturday. Aidan continued his no napping streak and I got a call about 2:20 pm letting me know that the boys would be coming to walk me home at 3. On the walk home we decided that we would try to go and get Anthony and Aidan’s hair cut if the barber was still open.Well, the barber was still open and we thought it would be a good idea to get Aidan’s haircut first. He really needed it and his bangs were very long. Wow. I am not sure quite how to express how upset he got. Howling and shaking. We had him on Anthony’s lap and we got hair everywhere. I was holding his head and J. was working as fast as he could. I felt very sorry for him, but I know that he is a good barber and has kids himself so I wasn’t worried. I had heard that some kids hate having their hair cut, but I didn’t think it would be a problem with Aidan. After the haircut trauma he cuddled into me and almost fell asleep on my shoulder. 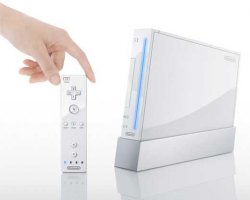 We decided to push things and went to the Stupid store for groceries and Anthony asked about the Wii. For those of you that don’t know the Wii is the newest Nintendo game system. We have been drooling over it and waiting for it to come out for months. As a result we have also been doing the should we or shouldn’t we dance. If any place had been taking pre-orders I am sure we would have made up our minds sooner and had one for today. Instead we got up early this morning got the boy out of bed and went down to Best Buy at 8:00 am this morning where they were sold out. Anthony had decided to take one of my lines and decided that we were going to work with our Wii karma. If we got to a few stores around us (Best Buy, London Drugs and Toysrus) and they had any left we would get one. If we got to those stores and they were sold out we wouldn’t. Well I guess our Wii karma was bad and none of the places we went had any left. However, Anthony thinks that he was able to order it online at Sears. We are not really sure because we don’t have confirmation yet but we are expecting an email letting us know when we can expect delivery. This won’t take the place of the xbox but I think that it will be a better game machine for the kind of games Aidan will play soon. Besides it is cool looking and hand motions will actually be a part of the controller. I can’t wait to try it. So I guess some Nintendo games will be on our Christmas gift lists. Well they will as soon as we get confirmation that the Wii is coming.

So Wii and a haircut were the bulk of our weekend though Kindermusik and the Grey Cup also are taking up a significant portion. Hmm, who said weekends were for relaxing? Whatever is left of yours, take some time to chill out.

2 Responses to Wii and a haircut