Aftermath from the Halifax Explosion Overlooking the Waterfront

I understand why for most Canadians December 6th is a day of remembrance not for a disaster that killed 2000 people in Nova Scotia, but of a mad man shooting 14 women at an engineering school in Quebec. It was a horrible tragedy and I personally know some people who were attending the school at that time and they have talked about the fear and pain that they and the rest of the school went through on that day. For me though the first thing I think about on December 6th is the collision of the Imo and Mont Blanc during war time in Halifax Harbour. 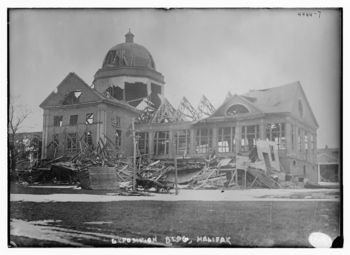 A Building Damaged in the Explosion

After the explosion on one of Halifax's main street, Gottigen

The whole thing happened because of a mis-communication and a language barrier. Many people stood and watched the ship float closer to Halifax and many people tried to help the crew of the Imo, not knowing it was a munitions ship. When the fire spread and finally exploded it destroyed almost 2 km in radius. Many of the people that didn’t die from the explosion died from the Tsunami that resulted from the explosion. To make matters worse it got really cold and Halifax had its largest blizzard in a decade the next day. Those that were trapped in blown out houses died of exposure. 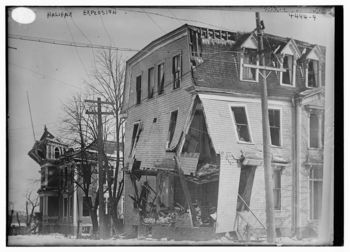 A house destroyed, though not flattened. 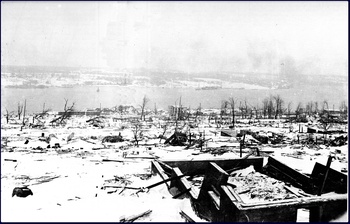 Halifax lost more people in the explosion than in the war overseas. Detailed estimates showed that among those killed, 600 were under the age of 15. As many as 1,600 people died immediately in the blast, the tsunami, and collapse of buildings, with about 9,000 more injured, most seriously. 1,630 homes were destroyed in the explosion and fires, with 12,000 more houses damaged. This disaster left roughly 6,000 people homeless and without shelter and 25,000 without adequate housing. 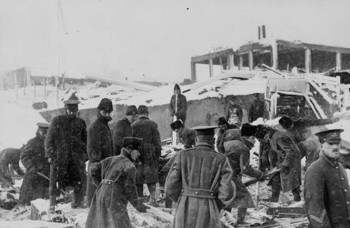 Soldiers worked throughout the blizzard to rescue as many people as they could.

With so many Canadians dead or injured, it always amazes me when I find out most people know nothing about the Halifax explosion. Most people don’t know why there is such a bond between Nova Scotia and Boston. Boston sent as many supplies and people as they could to help with the devastation the explosion caused. Nova Scotia to this day sends a huge Christmas tree as a thank you.

If you want to find out more, CBC has a good site, and a few years ago they made a docu-drama sort of thing about the explosion. You can also go to the Nova Scotia Archives and get more information as well. In fact they have a lot of photographs and a virtual exhibit happening right now.

1 Response to The Halifax Explosion: Repost