Pharaoh Serket and the Lost Stone of Fire: A Review 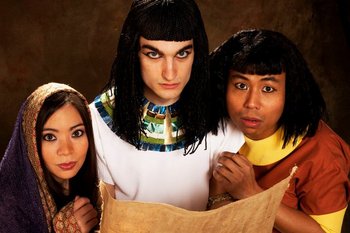 On Saturday night Aidan and I were able to attend the opening night of Carousel Theatre’s Pharaoh Serket and the Lost Stone of Fire. We got dressed up and headed to the Waterfront Theatre on Granville Island.  This is the last play in Carousel Theatre’s 2010-2011 season, and it is billed as a cross between Harry Potter and Indiana Jones. 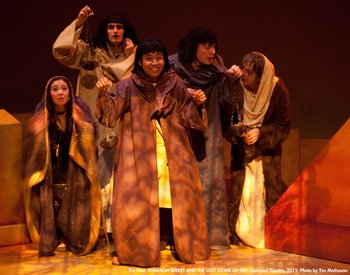 Pharaoh Serket is a story of a young king of Egypt who is talked into taking a journey to find a lost treasure of Shogali. With political unrest in Egypt, and recovering from an illness, Serket find himself on an adventure with Zalira, the witch who saved his life, Bakneb, the scribe, and Asteth, a thief and guide.  In the end Serket figures out who he can trust and how to be a good king. 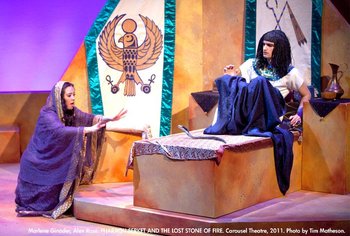 The set was fantastic, the costumes interesting and the comedic pratfalls and sneezes gave the play some well deserved doses of funny in this intense adventure story. The play was a little scary for the younger set, and Aidan would recommend it to kids a little older than him. He did enjoy the play, but there were some times when it was a little too intense. I must admit that there were a few parts that made me jump a bit too. 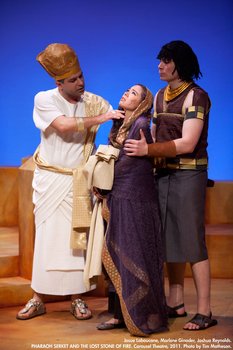 I think one of the best decisions I made this year was to get season tickets for Carousel Theatre. Every performance was fantastic and seeing Aidan so into the action was a treat to see. I can’t wait to get tickets for next year, including some extras for a few of the performances so that we can bring Quinlan.

Pharaoh Serket and the Lost Stone of Fire runs April 8th to 30th at Waterfront Theatre. For information and tickets call 604-669-3410.

Disclosure: I purchased the tickets to these performances and I was not asked to review the plays. All opinions are my own. All photos are taken by Tim Matheson and used with permission from Carousel Theatre.