One Year and a Birth Story

Last year this time I was a bit of an uncomfortable mess.  I was ready to not be pregnant, but Anthony and I were a little worried that my mom wouldn’t make it here in time.  I really wanted my doctor to be the one to deliver Quinlan and she was on call the Friday but not the Saturday and I had a feeling that I would be delivering sometime that week.  I cancelled an appointment with my hairdresser because I wasn’t sure if I would make it or not, and it was a good thing I did.  I won a ticket to a green family conference for the Saturday and I thought that I would try to go.  Aidan and Anthony had Preschool Curiosity Club also on the Saturday morning and my mom was due to arrive from Halifax at 1 pm. 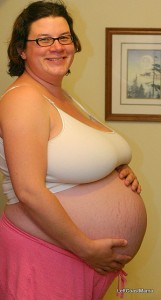 I didn’t think that Quinlan would take me so literally that I wanted him to be born on the 25th.  I know I kept telling him that he couldn’t come until the 25th in the evening because then Nana would be there to take care of Aidan.  We did have some back ups, but the few days before Tammy was away at a conference in Colorado, and we felt a little uneasy about calling Tomer and Carla in the middle of the night if we needed too.  Anthony wasn’t sleeping very well that week either because he was so afraid I would have the baby and we wouldn’t have anyone to look after Aidan.

We thought we were in the clear.  Saturday morning we all woke up, we knew my mom was in the air on the way here, I was feeling good and all of us had breakfast.  The boys were going to drop me off at the Wall centre for the conference and all would be good.  Then just after breakfast my water broke.  It was 8:30 am and I should have called Dr. I then.  I found out later that the switch over time was 9 am and she would have stayed for the birth with me if I had called then.  I was still planning to go to the conference since there was no pain, but luckily Anthony decided that it would be a good idea to stay home and put Tomer and Carla on standby.

My contractions started at 9:30 ish and they kept getting closer together.  The on call doctor told me to call him when they were 5 minutes apart.  By 11 am they had gone from 8 to 7 to 5 to 4, and by the time we got through to him they were just coming with almost no time in between.  Anthony called Carla, and when she said she was going to wait for Tomer to get back.  She must have heard the very tense voice Anthony had and decided not to walk leisurely, but made it in just over 5 minutes running.  Thanks god for that because things went really quickly from there.

Anthony and I got to the hospital at about noon and with the paperwork we were in pretty quickly.  After being assessed they were getting me ready to go up to the nice delivery/staying rooms but decided that with the way my contractions were going and the dip in Quinlan’s heartbeat that they should get me into a delivery room right away.  We got into the delivery room at a little before 1 pm and I had to push.  There was no stopping it and no time for the epidural that I so desperately wanted.  I am pretty sure that the nurse pulled a resident into the room because the on call doctor (I cannot for the life of me remember his name) was somewhere getting his scrubs on.  Anthony had no time to re-park the car or find something else for me to hold other than his hand.  Like the independent little cuss he is, Quinlan had decided that enough was enough and he was coming out right NOW!  Crushing Anthony’s hand I gave another push and Quinlan came into the world at 1:10 pm. 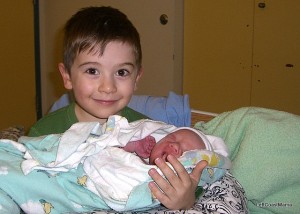 There is no way we would have made it up to the posh delivery/staying suite.  I would have had Quinlan in the elevator instead, he was that determined to come out.  At 2 pm my mom’s plane touched down in Vancouver.  It turns out that while Quinlan listened to the date I wanted him to be born, he was a little fuzzy on the time.

In looking back I can see in his delivery the type of personality that Quinlan has developed.  He is so determined to do everything.  He is curious, independent, and fast.  He loves to be close, but he is also not afraid to go and explore.  He is growing so fast and trying so hard to do all the things his brother does.

I can’t believe it has already been a year.  My infant will be an infant no longer.  My newest toddler.  My 1 year old. But always, always, my baby. 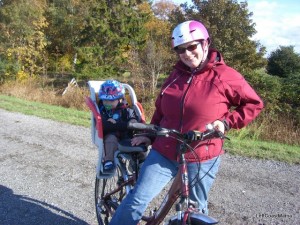 5 Responses to One Year and a Birth Story