On Old Friends, Coincidences and Fear

Over the past year and a bit I have been trying to come out of my shell and meet new people.  To this end I have been to several meeting and social events in Vancouver that have originated on either twitter or on blogs.  I have really been internet dating for friends.  To those of you reading blogs, twittering, going to conferences none of this will sound too strange, but to those who only read this one it may sound a little weird that I am looking for friends on the internet.

I started reading blogs when Aidan was only a few months old.  I started writing one a few months after that.  I was starting to think that being away from Nova Scotia and all the support systems there was a mistake, but I knew that Anthony was happy with his job and we made the commitment to stay in Vancouver until 2010 at least.  I made some mom friends down at the community centre but it wasn’t the same feeling of community as with some of the blogs I was reading and eventually commenting on.  I will admit now that I still don’t comment as often as I want to or as much as I should because I am still a little paralyzed by fear.  What if this person who has touched me with their words thinks my comment is stupid and banal? What if I spell something wrong and don’t catch it in time? What if I am just saying the same thing someone else has said only not as brilliantly?  I know that this fear is maybe a tad irrational, but I can’t help feeling this way.  I love comments and I don ‘t care if the person has a typo, but I put a lot of pressure on myself when I am the one commenting.  So I keep the blogs I want to comment on in tabs on my browser.  They make it out of google reader and I read through other comments and I stew over what I am going to say.  Then I get distracted by one of the two children that need me, lunchtime, suppertime, preschool drop off/pick up, or any of life’s other distractions and I dither on whether I should actually comment or not.  More often than not I don’t actually make it to the commenting.

Why am I explaining this?  Well as hard as it is to be confident when writing on someone else’s blog, it is even harder when you meet them in person.  I may strike some people as confident, but I hide my insecurities well, or at least I think I do.  So over the last year I have been putting myself out there, meeting new people, going to new places and trying not to be the one in the corner just watching everyone.  I went to Northern Voice and was part of my first blogging conference.  I met with Kerry of Crunchy Carpets and some of the other Wet Coast Women.  I now see Kerry everywhere and I get to know more of her every time.  I met with a few fantastic women to brainstorm about a conference in Vancouver for social media and blogging for women.  I met up with some Yummy Mummies for coffee and dinner.  I went to a pre-blogher meet-up and even planned/hosted a pity party at the beach for those of us not going to Chicago.  I met and planned some play-dates with another beautiful writer and fantastic mom and have kept in touch with her.  Though we don’t meet as often as I’d like, I count her as a kindred spirit.

Tuesday night I got to meet a blogger that I have read for years and was someone whose work touched me deeply.  I missed a while when I changed feed readers, but I made sure that I caught up.  I follow her on twitter, and I was disappointed that I didn’t get to Chicago to hear her speak.  There was no way that I was going to miss an opportunity to meet her in person.  I knew in my bones that she would be interesting to talk to and that our conversations while brief would be great.  I got to SteamWorks late and I did a couple of rounds to actually find the group. I almost gave up and went home, but I decided that  one more look was warranted. So I went down the stairs and went to the back corner where there was a group of unfamiliar people, but I saw the flash of a couple of cameras and I figured this might be the group.  This time I did see Kristin and I swallowed my fear and joined in.

Kristin introduced me to the table and lastly introduced me to Kate Inglis of Sweet Salty.  Kate and I looked at each other and Kate said “I know you.”  We did the we are both from NS, and we went to different high schools, were in music and then it hit me.  Kate was Katie, and we went to Choir Camp together.  We had known each other since Junior Choir Camp, and went on to Youth Choir Camp and Fall Youth Sing put on by the Nova Scotia Choral Federation.  We went to Camp Kadema, the Jewish camp for a couple of years and to Berwick at the United Church camp for a few and then on to Acadia.  Kate had been a part of my most memorable moments.  This woman who has been one of my blog and writer crushes for so long, was actually somebody who was a part of my youth. 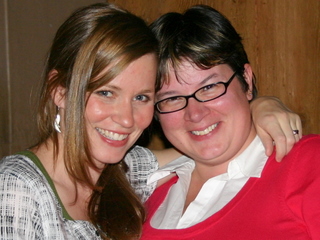 I am so glad that I swallowed my fear and went back into the restaurant.  I am reconnected with someone, and I hope that we can stay part of each other’s lives.

9 Responses to On Old Friends, Coincidences and Fear