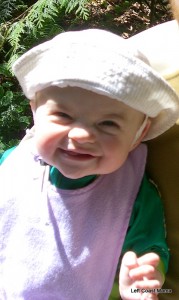 I feel guilty in admitting this, but I am sick and tired of baby puke.  I know, it is called spit-up to make it more palatable, but baby puke it is.  There is not a day that goes by that I am not regurgitated on (several or dozens of times) by my now almost seven month old, and it is getting old.  I keep hoping he will grow out of it and start to keep his food down.

I sometimes worry about his digestive track, and I have forcefully kept myself from google because of this.  He hardly ever has what I consider to be a normal bowel movement, it is always very wet, yellow and hardly ever has “curds” in it.  If he wasn’t growing like a weed and in the 50th percentile for weight and 80-90th for height I would be really worried.  I hesitate to talk to my doctor about it, because I don’t want to seem like one of those moms who worry all the time about their children’s pooping habits, but I am one of those moms.  Is this really a bad thing?  Should I worry more about my child’s pooping issues?  Does this mean that since he is an almost exclusively breastfed child that I am eating the wrong way?  Should I have started solids sooner?

It has only been the last week that I have made a concerted effort to really try to get Quinlan to eat solids.  He didn’t even want to try the rice cereal and it is only this week with sweet potato and now carrots that he has shown any interest in solids at all.  Sweet potato got the thumbs up as well as a few raspberries.  He would show his appreciation (or so I thought) by eating some and then blowing raspberries and getting sweet potato everywhere.  Then I tried carrots last night and low and behold, just eating, no raspberries.  I haven’t yet tried this morning but I am hoping it will go as well.

I was also told that if we started him on solids he might stop wanting to get up in the middle of the night to eat, that it was habit.  I am now not so sure.  For quite a while Quinlan was sleeping from about 10 pm until 5ish.  Now he goes to sleep at about 7:30 pm (I feed him to sleep) and starts crying for a snack about 2:30 am.  He then wakes up again betweek 4 and 5 am for another feed.  It is making me a little cranky.  I can’t blame him or ignore him, so I am getting really tired.  If I wasn’t a morning person before it is really unlikely I will start to become one now.

So the bottom line is I need some advice on stopping the puking, and helping his bowel solidify some of the poop.  Or maybe I just needed to vent a little and then some reasurance that despite my fears, since Quinlan is a happy and well adjusted baby, he probably isn’t suffering with his pooping and puking problems. 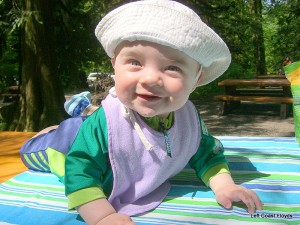 Quinlan Happy in the Sun

6 Responses to Sick and Tired