I was hoping to post this entry yesterday, but I tell you, whoever thought that a “Pirates Who Don’t Do Anything” party theme was going to be a snap, was obviously kidding herself. I was finishing the pinata and still sewing the pirate vests at 12:30 am the night before the party and I finished them (at least the last vest) the next morning. Now those of you who know me, yes I did procrastinate, but I also had visitors for most of this week. It is also very hard to hand sew the pirate vests, and make them look halfway decent. I do know now that I can borrow Monette’s sewing machine if I undertake this lunacy again. Who am I kidding if course I will do something equally insane next year. Of course this was the day that all 4 boys needed naps and the start time was a little late because they all had to be wakened up. 🙂 I did think for a few minutes that if everyone didn’t come I would strangle myself with the pirate vest and hats. 🙂 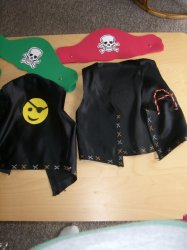 The morning started early (after Anthony and I didn’t get to sleep until very late) though I am sure that Aidan didn’t know that there was something different about yesterday. I needed to finish the last vest and then use the metallic paint pen to decorate the edges and since they looked a little bard the pirate happy face patch on the backs of all of them. And, oh, we still needed to finish making the cakes, clean up thee house, vacuum, have lunch (I skipped breakfast), get Aidan down for a nap and make the best two train table setups we could. We also wanted to get Aidan to open his presents slowly so that he could take some time with each and play with them. We had planned to open some the day before but things got in the way. Anthony also squeezed in putting Aidan’s new toy organizer from Ikea. I have no idea how we managed to do as much as we did before the guests came. 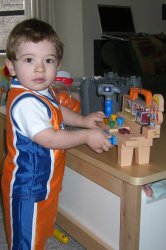 Aidan with his new Bob the Builder Bench, and a Hammer that makes noises when you hit it. Hmm, yes this was from his Aunt Paula. He loves it, but I really need to find the speaker and tape it up to lessen the noise. 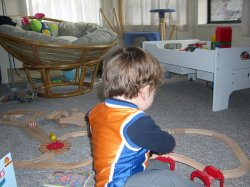 Aidan with his new track set for his “TRAINS!” 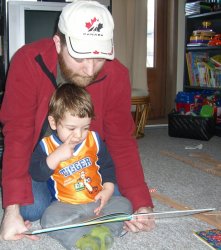 Anthony and Aidan with “47 Beavers” by Phil Vischer 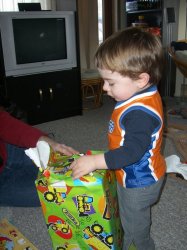 Aidan opening a gift from his Tati Lynn.

At 3: 30 Monette and M. were the first to arrive and we had our first couple of wrinkles. M. had just woken up and Aidan woke up when the doorbell rang. That doesn’t usually bode well but both kids seemed ok, that is until M. got upstairs and he saw the cat sleeping in the basket. I didn’t realize that M. is afraid of cats well all animals after being terrorized by a small dog a few months ago.) So the poor kitties were locked in the bedroom for the kids portion of the party. Very soon after Gen and T. came and then Hebaaq, Bret and J. were there. The other thing of interest is that it was also a virtual party for the folks back east. My mom and Grandmother went up toJohn and Kathy’s to watch the party on the big screen. They also had cake. 🙂 It was a little hard to be interactive with the party back home but I think tney enjoyed watching the boys and their parents having a good time playing with the trains and cars. The boys looked really cute in their outfits and all was well. (At that point I realized the work was worth it.) 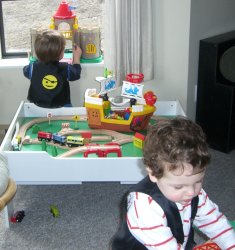 Aidan and T. (back to front) 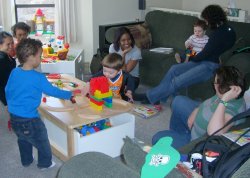 Group shot of the boys and the parents. (What possessed me to wear stripes yesterday.?) 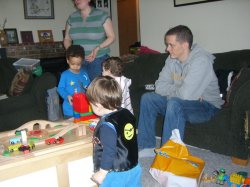 Aidan in the foreground, Bret, T. and J. and Gwen (me). The vests look pretty good on, don’t they?

At about 4:30 the party really got going when I brought out the pinata. It is made to look like Pa Grape from the VeggiTales “The Pirates Who Don’t Do Anything.” The boys liked it well enough and I had it rigged so that when I removed the pipe cleaner from the bottom that the treats would come out from a trap door in the bottom. I really didn’t want 4 two-three year olds with a stick trying to break something. Yes you get the picture, encourage them to hit things indoors? I am not crazy. The parents especially seemed to like the punching balloons and blew them up right away. I wasn’t exactly expecting that but the boys had a grand time and it brought M. na dJ. out of their shell and they were the life of the party from then on. 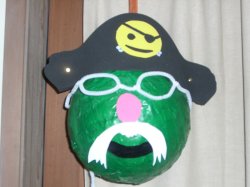 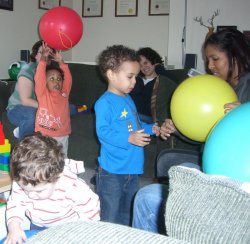 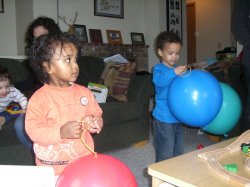 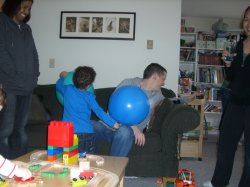 Then it was time for cake. Anthony made cupcakes so that we could have each of the boys blow out a candle. Oddly enough all the boys except Aidan were quite happy to do exactly that. Aidan didn’t want to be anywhere near the candle. That is right, my boy is afraid of fire. 🙂 He did like the cake though. 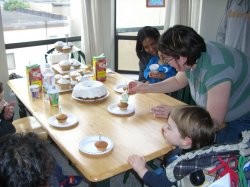 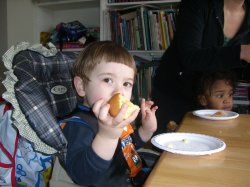 After cake and just befoer the boys went home we lined them up on the sofa and took a few pictures in their vests and Hats. Of course Aidan didn’t want to at that point so I had to be in the picture too. Anyway I thought they were cute. 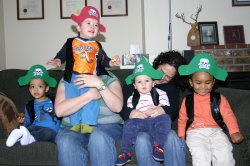 The Birthday Pirate with an Attitude.

After all that excitement and the fact that Tomer and Carla came over afterwards meant a difficult bedtime routine, but eventually the boy went to sleep and Mommy and Daddy breathed a sigh of relief.

And so ends the factual post of the Birthday of the Pirates Who Don’t Do Anything. Check in tomorrow when I blubber about how my baby is now not a baby anymore. 🙁

This entry was posted in Aidan, Birthdays, Pirates, VeggieTales. Bookmark the permalink.