This afternoon (well yesterday now)  we went to see the opening of Carousel Theatre’s production of Aesop’s Fables.  Directed by Carole Higgins and starring Mishelle Cuttler, Kayvon Kelly, Melissa Oei and Mike Stack, Aesop’s Fables is a brilliant short play. From the moment the stage lights went up to the question and answer period at the end the audience was actively engaged in this lovely piece of work. 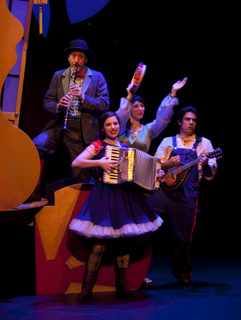 In Aesop’s Fables we meet Harriet, Wolfie, “and I’m Syd” and Barry, the newcomer to the group, a rag tag bunch of players who travel by caravan and stop to make music and tell stories to audiences all over the place. Using their magic transforming caravan, they play musical instruments and imagination to tell stories and teach lessons to their young audiences. Adapting four of Aesop’s animal tales; The Tortoise and the Hare, The Boy Who cried Wolf, The Lion and the Mouse and The Wolf and the Jackdaw, the four use song, dance and the audience’s imagination to entertain and learn important life lessons.

Yay!  Carousel Theatre has done it again. Aesop’s Fables is another fabulous production from all accounts. The sets are bold and beautiful with a bright red and gold caravan that converts to a small stage and lanterns hanging everywhere. The lights enchant the forest surrounding the caravan and set the stage for the stories.The costumes are colourful and imaginative and the head pieces bring the characters in the stories to life while still giving us a clear view of the actors underneath. The actors have awesome chemistry with each other and bring the audience in as the fifth player, or maybe even as a flock. 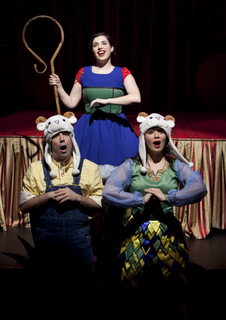 Aesop was the perfect first live theatre experience for Quinlan. While he was a little apprehensive when the house light went down, as soon as the stage lights were on he was fully immersed in the play. Quinlan was happy to be part of the action when asked and transfixed the rest of the time. Aidan has seen a lot of plays over the last few years and this was one of his favourites. When the play ended he was shocked because it seemed so short as he was so engaged in the action and story ark. Aidan would have been thrilled to see these players do as many more stories as they cared to tell. If you asked him I am sure he would have been happy to jump up on the stage and help them. As it was it was hard enough to keep in his seat as he was so engrossed in the play.

As Aidan says in his soon to be released video review, go see Aesop’s Fables, it is awesome! It runs from February 17-26 at Waterfront Theatre on Granville Island. This is the first of Carousel Theatre’s productions that has opened up the weekday matinees usually reserved for school groups. Tickets are $15  for ages 3-17, $25 for students and seniors and $29 for adults. Call the Carousel box office at 604-685-6217 for more information.

All photographs are provided by Carousel Theatre and are taken by Tim Matheson.