Tonight I am going to the opera and I get to be one of the bloggers on display. I am looking forward to the spectacle of the dresses, drama and of course the singing. I love opera and if I had the guts and voice for it, it might be something I would have done as a career. In my years as a Dalhousie music student, I am sure my vocal teacher would have laughed at that statement, but it is true. I came to love opera and I am so in awe of those that have the vocal and acting talent to pull it off well. 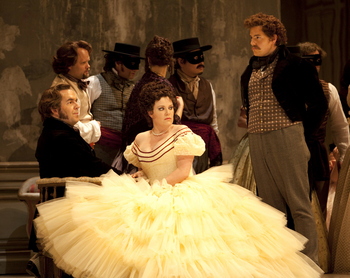 Tonight the Vancouver Opera company is putting on Giuseppe Verdi’s  “La Traviata” with Erin Wall as Violetta and David Pomeroy as Alfredo. 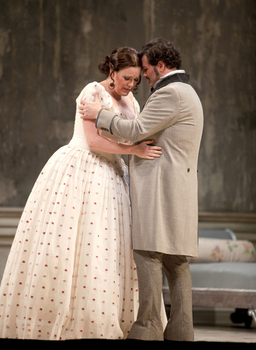 Violetta is a consumptive courtesan who takes up with Alfredo. As with most opera things do not go well for the couple as Alfredo’s father doesn’t apporove and convinces Violetta that Alfredo’s sister will never get amrried if she and Alfredo are still together. Alfredo, not knowing what his father has done, meets up with Violetta with another man at a party and things do not go well. It is not until Alfredo’s father realizes how sick Violetta really is that he relents and tells Alfreo what he has done and consents for the two to marry. In the end Violetta and Alfredo don’t marry, but she gives him a small portrait of herself and prays that he and the woman he does marry are happy. She then dies.