On Saturday we were fortunate enough to be invited to a kids party at Casa Italia that was sponsored by Kinder of the Surprise eggs.  In our house there are two things we love, chocolate and the Olympics so we enthusiastically donned our Olympic gear and headed down to Yaletown. 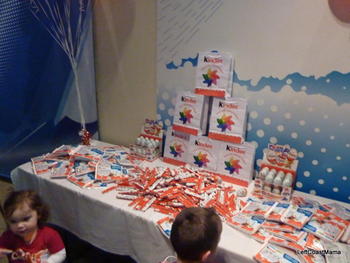 Just One of the Tables Full of Kinder Chocolate

Casa Italia is being housed in the Roundhouse, and we were being let into the part of the house not open to the public.  There were lots of things for the kids, including face-painting and dancing and all the chocolate they could possibly eat. There was a professional photographer there taking pictures of the kids in front of a blank screen and when they are photo-shopped onto the background of our choice they will be emailed to us.  We got a nice one of Aidan by himself and hopefully a nice one of all three of us.  As soon as I have the pictures I will update the post. 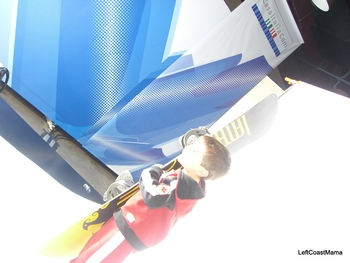 Aidan Posing With a Snowboard

Aidan and Quinlan had a ball.  Aidan got the chance to be a dancing machine for Italian television as he led the kids and adults in dances that he made up like the roller coaster.  Really I think he has the soul of a disco dancer as the roller coaster is running around and rolling his hands around each other. The people who organized the even and the Italian host seemed to love him. Or at least that is what I am telling myself.  He was really well behaved and didn’t take very much chocolate.  (We also brought some of the chocolate to share with his preschool class.) 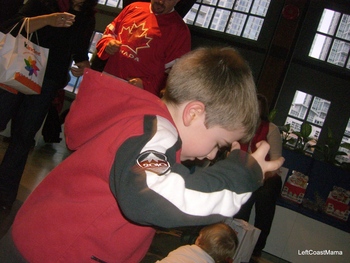 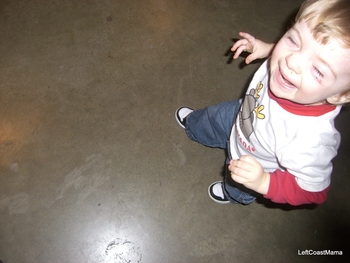 Quinlan Dancing With a Good Look at His Black Eye

It was lovely to see some of my favourite Vancouver parent bloggers and their kids.  We also got to meet some others bloggers that we hadn’t met before.  There were only two things that I would have changed. One, I’d open the doors because it was very hot. Second I would have invited some of the Italian athletes.  It would have been really nice to get the kids excited about the Italian teams as well by having a few ambassadors there.

Thanks to Kerry for sharing her invites and to Andrea from Harbinger for putting together the event.