Olympic Torch Relay: A Chance For Aidan to Shine

When Anthony and I moved to Vancouver almost 13 years ago we knew we loved the city, but plans for after his PhD were murky. When Vancouver got the games seven years ago all we knew is that we really wanted to stay and experience the games as much as we could.  When Aidan was born we knew he would be almost five and this would be an even better experience and boy were we right.  Aidan has been so excited about the 2010 winter Olympic Games, especially when we went down and got the boys (and us) some Canadian Olympic gear. 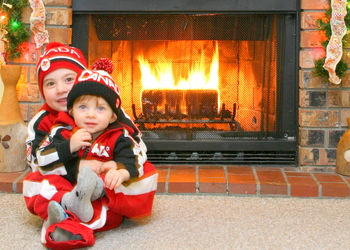 Aidan and Quinlan in their Olympic Gear

On Thursday we got the chance to see the Olympic Torch Relay up close in two spots.  We decided early on that Quinlan, Aidan and I would go to Vancouver City Hall to see the torch and take in the atmosphere of anticipation.  I was a little apprehensive because of the threat of protesters ruining it for everyone, but I decided to be positive and we invited some of Aidan’s preschool friends to go with us.  Jasmine (Veronica’s mom) told me she was making a torch for Veronica and that inspired me to make a torch/magic wand for Aidan and Quinlan.  I also realized that I had 3 white pirate hats leftover from Aidan’s birthday party last year so I made the 3 kids some Olympic hats.   I think they were the cutest kids there.  Thankfully Keiko (Shinto’s mom) was there as well since she had the working camera. 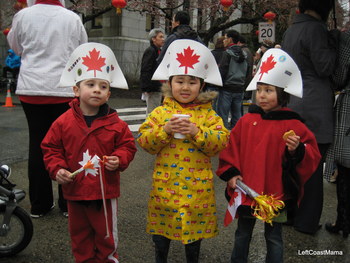 Aidan was so well decked out that he was tapped to be part of the pre-show. He and Veronica were picked by some of the city of Vancouver staff as the the “best red” kids.  We asked that they let Shinto come up too since they were all together and we let him wear Aidan’s jacket.  They were called up to the stage (the steps of city hall) and they ran through the gauntlet that the torch runner would go through.  Aidan started his “Go, Canada, Go!” cheer. 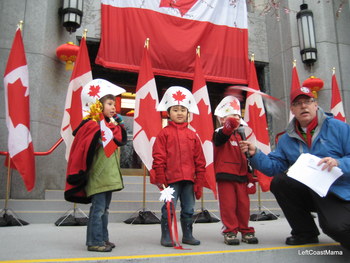 I almost cried I was so happy for Aidan.  He always wants to be picked to go up on stage and he finally got his chance.  They then ran back to cheers and clapping while they waved their flags and torches.  It was the best feeling. 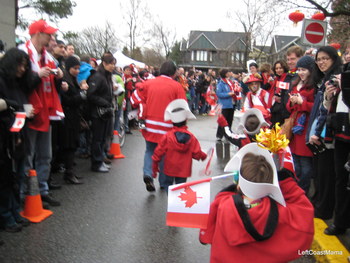 Running Back Through the Gauntlet to Cheers.

We then waited and the kids did the “Go, Canada, Go!” dance.  We were very lucky and it didn’t start raining until just as the torch went by us. 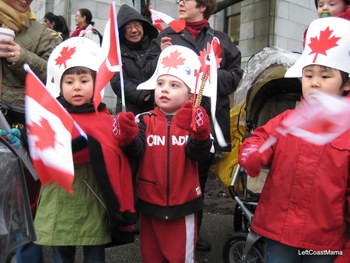 Look at the Torch!

Right after the torch went by, we had a quick hot chocolate to warm up and then Quinlan, Aidan and I headed up to UBC so we could see the torch as it came through.  As a bonus we would get to experience it all together since we picked up Anthony at work.  Unfortunately this experience wasn’t quite as fun since it was pouring and it was cold.  It was a bit better for actually seeing the flame however, so I am not sure which was better. 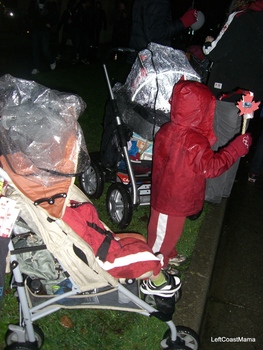 By the Forestry Building in the Pouring Rain 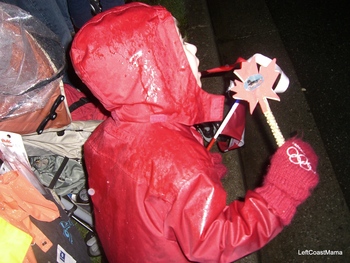 Getting Excited to see the Torch Again 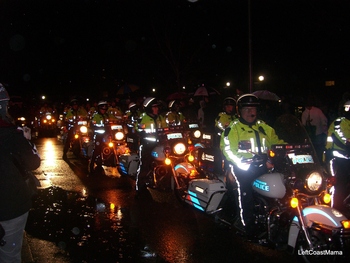 We didn't see the police escort at city hall, but here it is massive.

It looks like we don’t have any pictures of the actual torch, but we did get it on video!

I think all in all it was a fabulous way to start our Olympic weekend.

7 Responses to Olympic Torch Relay: A Chance For Aidan to Shine