The Bicycle Valet: A Great Way to Experience the Olympics

When Anthony and I got tickets for the opening ceremonies to the 2010 Winter Olympics we were thrilled. The only problem we encountered was the early start of the audience participation practice and the anticipated waits at the security line ups.  We managed to find a babysitter but since she was working until 3:30 we weren’t sure how on earth we were going to make it to the security line up in time since we had planned on walking.  Then we hit on the perfect solution, we would ride our bikes. The only part that concerned us was where to park them during the ceremony. 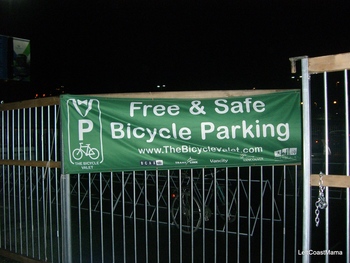 We had heard Mayor Gregor Robertson say on the radio that there would be a bicycle valet near the venues, but we hadn’t really heard too much else about them.  Anthony found out that there was some bike parking from the 2010 Olympic site but it didn’t link to the Bicycle Valet site so we weren’t sure how exactly it was going to work.  It turns out that the bicycle valets are all over the place and have volunteers watching your bikes while you go off and do your thing.  The big thing? THEY ARE FREE! 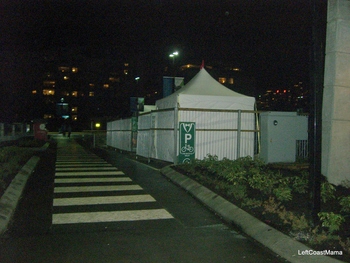 For the opening and closing ceremonies the bicycle parking was under the Cambie Street Bridge so we got to BC Place from our house in 15 minutes flat.  It would have taken us about 30 minutes or 45 minutes depending on how much we were hoofing it to walk.  The bike parking was not at all crowded and it kept our bikes dry.  (I am not sure if all the bike parking is covered so if it is raining you might want to bring a cover for your seat. )
View Detailed Olympic Bicycle Valet parking locations in a larger map

For more information on the times  Bicycle Valet is open during the Olympic and Paralympic Games, pleas check their website.  They also have some good tips on how to use the bicycle valet to make things easier for both you and the volunteers.

This entry was posted in Vancouver, Vancouver 2010 Olympics and tagged Bicycle Valet, Bike Parking, Bikes, Commuting, Environment, Getting Around During the Olympics, Olympics, Paralympics. Bookmark the permalink.

6 Responses to The Bicycle Valet: A Great Way to Experience the Olympics