Wow, where was I?

I am just noticing that it has been a long while since I have posted. You would think that when Anthony was home I would have more time to post. I actually did some posting from Left Coast Floyds though Anthony did most of the posting for the holiday. So I guess that for those that don’t read my other blog (though I don’t know who that would be) I should give an update of my holidays.I was pretty busy with decorating, beading and singing and oh what else, ah, taking care of Aidan while doing a little bit of shopping and baking on the side. I also did get a lot of freer time with Anthony home the week between Christmas and New Years. It was really nice to be able to sleep in a bit.

So the weekend of the 12 we got the tree out of the storage locker (my what were we thinking when we put it in that spot) and put it up. I just wanted the plain tree to be there for a bit so that Aidan would get used to it and maybe we would have less problems with him playing with the decorated tree. The next weekend I got the lights on the tree because Anthony didn’t really want to and his back is still not totally healed. I say this because I got a bit of flack for how many lights are on the tree. I think it looked beautiful, but that being said we needed to buy two more sets of 100 lights to finish the tree. (Oddly enough, two years ago when I lit the tree I needed to buy a new set of lights then.) You can judge for yourself. I like it. 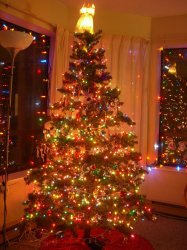 That weekend we also went to see Charlotte Diamond at a free concert at City Square. This was in the very small mall’s very small food court. Aidan was good but got fairly restless and since we didn’t want him to pull out any wires from the stage we kept a fairly tight reign on him after the first 15 minutes. If there was more room I think that he would have happily danced with the other toddlers for a while. It was a nice concert and it was free.

Things slowed down for a few minutes for Tammy so Aidan and I actually got chance to spend a bit of time with her before Christmas and she and Chris actually got here for our it is not Christmas yet poker night. It was nice and she and I have decided that at least once a month we need to have a crafting night. We may not actually get any crafting done, but it will be nice to visit.

Advent flew by and I sang at 2 Advent Carol services and got to sing a few of my favourite solos. The first one was a special service on the first Sunday in Advent and I sang “O Come O Come Emmanuel.” It is adapted and sung with a Bach Prelude for accompaniment. I also almost killed myself to play the prelude with “Zion Hears the Watchmen’s Voices” by Bach. It was well received, but I am sure that the choir had some second thoughts the first few times I played it for them. The second one was the combined service on the third Sunday in Advent and I sang “He Shall Feed His Flock” from Handel’s Messiah and the first verse of “In the Bleak Midwinter” by Harold Dark. Anthony and Aidan were at the first advent service but ended up staying in the cuddle room playing most of the time. It is too bad, but Aidan was doing some singing of his own and was a little loud. (What can I say,I liked it, but it is always hard to tell if the congregation feels the same way.) After the Service on the 17th we went on the church’s Carol ride through Stanley Park. Now you may have heard about all the trees and devastation in Stanley Park. We were the first group back in the park and it was very eerie. All the parts of the park we could see had significant damage, and the parking lot attached to the stables was being stacked with tree bits that had been on the roads. It was amazing to see.

On the 23 December Anthony, Aidan and I went to the VanDusen Gardens Festival of Lights . Our luck was holding out because we discussed getting tickets beforehand, but we didn’t. This was good because Starbucks was paying for the admission. Cool hun? Anyway, we don’t have too many good pictures (no tripod and my small camera) but we do have a few. I loved the lights (yes I think my tree would have fit in nicely) and Aidan and Anthony really enjoyed it too. We had Aidan out of the stroller for a while and he found every small puddle and had to splash. He is such a little boy. 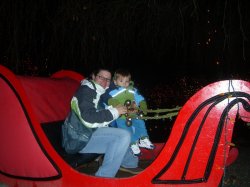 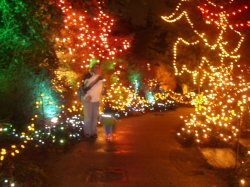 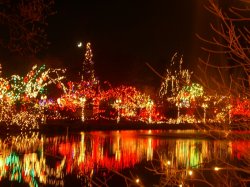 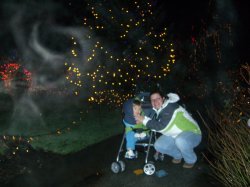 In case you are wondering that is not a ghost but Anthony’s breath. Cool effect isn’t it?
Christmas Eve

On Christmas Eve Anthony and Aidan came to church with me in the morning because we knew that Aidan wouldn’t be very happy to be at the midnight service. I know that it wasn’t a Christmas service and only an Advent but it was better than not going at all. We had a pretty easy day and got Aidan ready for bed in his Christmas pajamas. Isn’t he cute? 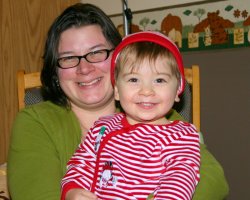 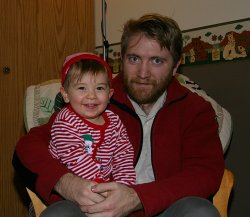 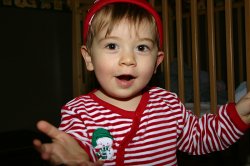 After Aidan was in bed Anthony and I were inducted into the put it together the night before Christmas while the kids are sleeping club. We put together his train table and set up the track. I am glad that it wasn’t something to difficult to put together. Next year will be different because we won’t be able to shop for things with Aidan in tow. We are going to have to find some babysitter so that Anthony and I can find some time to shop without him. Anyway I think we did ok for our first putting together Christmas. 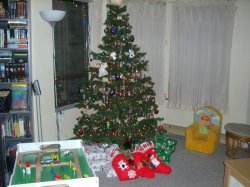 Aidan loved his train table and was a little overwhelmed by all the presents. We were web camming back with the Grandparents east and it was hard for Aidan to get a toy and not be able to play with it right away. Next year we will do things a little differently. Aidan can open things when he wants. We will have 1 or 2 presents from back east to open in front of the grandparents and then he can play with or open as he likes. I think it will go better. I also plan to take all the presents out from the ties before wrapping them. I will suggest the same to all sending him toys with the tortuous twist ties. Aidan was tired and took an early nap. We went to dinner at Tammy and Chris’s place. Aidan was very well behaved in the not childproofed apartment with a kitten and a cat and a dog. We tried to get him to sleep there but it was too exciting. When we got home at 8:30 he practically dived into the crib to sleep.

This was the day that I had the big turkey dinner. Ali, Tammy and Chris came over. We had a lovely dinner and Aidan had an early night. We played a lovely game of Monopoly and Tammy beat us all soundly. It was a nice and relaxing day. I am very glad we decided not to have the dinner on Christmas Day. It would have been just way too much. On the 27th we did the boxing day sales thing and then we happened to be in an EB when they got some Wiis in. We got that and a few games and that was all we did for the next few days.

New Year’s Eve was also quiet and since there is absolutely nothing happening in Vancouver. No first night celebrations here. Boring. So we watched a few comedy specials on Cbc and went to bed at 10:30. Happy New year. 🙂

So that was our holiday. I am sorry the post was so long, but those of you who are reading might actually be interested. If not I am sure that you skipped to the end.

Here’s to a new year.

This entry was posted in Advent, Christmas, family, wii. Bookmark the permalink.