Life Goes [Somewhat] Back to Normal

It is hard to imagine how we went from a mysterious pain in Aidan’s hand to two hand surgeries, one an emergency, to working on Lego with both hands in just over three weeks. How did a healthy boy get a Strep A skin, deep space, blood and bone infection all emanating from his left hand? There were no animal or insect bites, not cuts or bruises even. It is a mystery and because of the way it (the infection) presented itself things got a lot further than they probably should have. As Aidan’s plastic surgeon (the one who did surgery on his hand)says, “It is great to have interesting and unique cases in your career, it isn’t so good to be the unique case.” Things about how and when and how are still running through my head, and when I have a better picture I will blog the whole story. In the meantime here is an update on Aidan now. 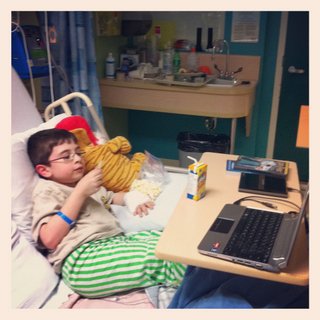 Getting better in BC Children's Hospital

Things are going well and are getting back to normal. This week was filled with no school, but with lots of appointments. He has seen Dr. Cortemanche, the plastic surgeon twice for dressing changes. Aidan is healing well and the dissolving stitches are nearly out. We go again on Tuesday to get the dressing changed and hopefully to less bandaging. According to Dr. C the bacteria on his wrist bone was a different bacteria, so we are not sure exactly what that means though the treatment doesn’t change. Aidan is still on antibiotics and will be for at least the next 10 days or so. We will find out at his next pediatric appointment on the 23rd if he needs to be on them longer. 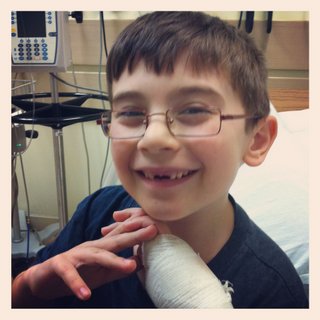 Aidan on the way out of the hospital on Monday saying "I'm free!"

I figure that the physio will be the longest road here. Aidan still has limited use of his hand and we have a lot of physio homework in between appointments. While Aidan has been off any pain medication since tuesday, it still causes him pain to move his wrist and his fingers don’t do exactly as his brain asks right now. This is to be expected and Aidan still guards his hand so much that we really need to work on getting him to move it voluntarily. 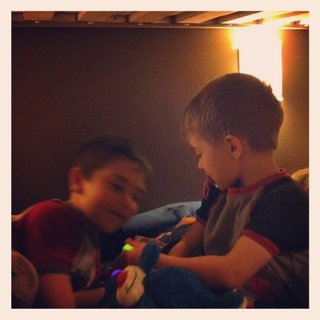 Back to betime routines.

As for getting back to real life, he had his piano lesson this Thursday while Quinlan had his ballet class. Since the piano was only a half hour it was a good start to getting him back into the swing of things. On Monday we hope to get him back to school for the first time in about 6 weeks what with the strike, march break and then hospital. I am not sure who is looking forward to him going back more, me or him. We still have a lot of doctor’s appointments and physio appointments and it is a short week with two early dismissals and a pro-d day, but he should be back for at least a couple of days. I think even Quinlan will be back to preschool as he is finally over (knock on wood) the norwalk virus he had. I may actually have a few minutes to do something all by myself. 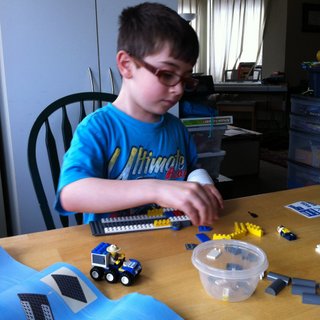 As we write, (well speak didn’t seem to work in this case, maybe read?) Aidan is putting together his Lego heavylift helicopter, finally. He has been chomping at the bit since the 25th March to put this together. It is quite complicated and he is putting it together (mostly) by himself. Quinlan is out for a bike ride and playground search with Anthony. Big sigh there, after nearly three weeks of sickness and Aidan being in the hospital Quinlan is vibrating with all the energy he hasn’t been able/allowed to run out. I am sure his behaviour will be much improved today with a real outlet other than mischief. I think Anthony and Quinlan have hit 5 playgrounds so far. I wish there were as many playgrounds on this side of False Creek. 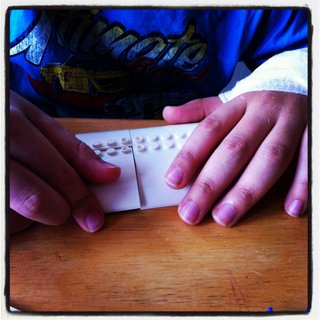 We are getting all dolled up for the matinee of Jason and the Argonauts put on by Carousel Theatre this afternoon so expect a review soon! Yay for things hurdling back to normal.

This entry was posted in Aidan, Quinlan and tagged Aidan, Hand Infection, Home from the Hospital, Physio. Bookmark the permalink.

4 Responses to Life Goes [Somewhat] Back to Normal