Guess What We Did Today

For weeks now Quinlan has been afraid of Santa Claus. He said he did not like his moustache at all. He did not like that Santa came into the house down the chimney. He was not sure about this Santa person at all, and he seemed to want to be as bad as possible so Santa would not come. Today that all changed.  After preschool today we went to Oakridge to do some playing in the pit and a few walk bys of Santa Claus. The first walk by Quinlan said he seemed like a nice Santa and his beard and moustache were  . . . ok. After the second walk by he thought that yes he was a nice Santa and maybe he might like to go see Santa. After playing a little longer Quinlan decided that it would be nice to visit Santa before we went home for a nap. Quinlan was very brave and after a couple of minutes he was on Santa’s lap and talking about eating vegetables and what he wanted for Christmas. This afternoon after picking up Aidan from school we were able to get the picture. 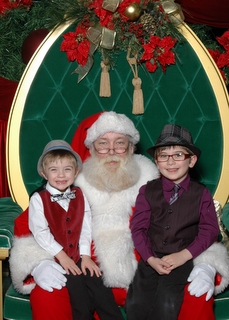