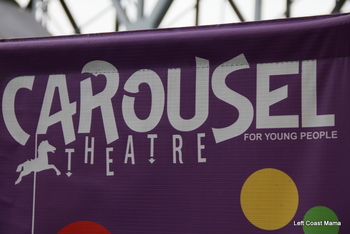 This afternoon Aidan and I went to see “Bird Brain,” the latest play in Carousel Theatre’s 2010-2011 Season. I am so glad we decided to get season tickets for 1 adult and Aidan because like all the other Carousel productions we have seen, Bird Brain was fantastic. 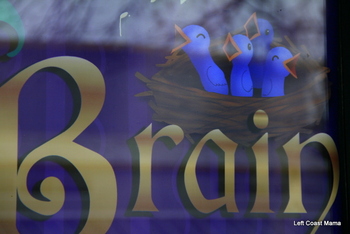 One of the nice things about seeing a Carousel production is that you don’t need to worry about you children and the reactions they invariably have. I have yet to see a play with Aidan where he doesn’t laugh, or gets so into the action that he makes a remark. In a Carousel play he isn’t the only one. 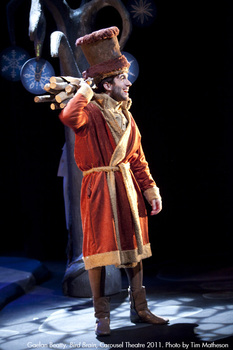 Bird Brain is a fairy tale about a woodcutter who befriends some birds who promise him a “clear mind.” Once he has a clear mind he is so happy that he is thought a fool. Luckily the Queen has a soft spot for fools and demands that the undersecretary bring Bird Brain to the festival she decides to have for the fools of her domain. 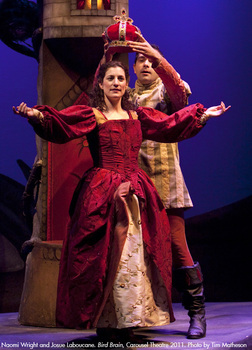 Like all fairy tales there is some darkness among the fun, and it is dealt with in a way that doesn’t frighten the kids. Aidan is a sensitive kid and I was a little worried that the references, however obliquely, to the hangman’s noose might frighten him. It was handled without using the words “chop off your head” instead making a choking sound.  Aidan and all the kids around were entranced by the action and happy to laugh and clap.

Aidan liked that there were so many characters played by the three actors, Gaelan Beatty, who played Bird Brain and a story teller, Naomi Wright, who played the Queen, a story teller, and an ensemble of characters, and Josue Laboucane, who played the Undersecretary, a story teller and a whole host of other fools. Aidan especially had a connection with Josue, who was one of his fantastic teachers at the Carousel Theater school.  I am sure he will go crazy when he sees Laura in “Munscha Mia.”

If you have a chance to go see a Carousel production with your child, do, you won’t regret it.

All photographs that are not mine have been used with permission of Carousel Theatre.

Aidan’s vlog is taking me a little longer to edit than I thought it would so I will post it tomorrow. Just to take the suspense away, he gives it a rave.