Aidan is a five year old with a flare for the dramatic and a gift for dialogue.  He loves reading and listening to audiobooks.  His imagination is very well developed and it sometimes astonishes me how articulate he has become. 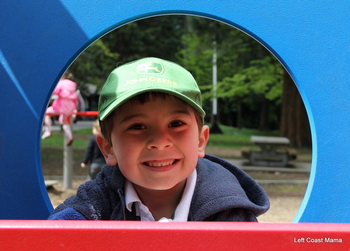 Since he discovered them about a month ago, the Geronimo Stilton series has become a favourite around our house in many scenarios.  He loves to read the books, he loves to listen to the audiobooks and he loves to pretend that he is one of the many characters.  He acts out, with the different voices no less, scenes from the various books as well as a number that he has made up.  He pays attention to detail and has elaborate plays including props and extra dialogue.  Aidan has also discovered a love of narration.  He will narrate his plays and you will hear him say things like:

“I love you Mommy,” he says as he hugs her tightly.

He says the whole thing as he is doing the action.  It is really quite funny and dear.  He also makes me pretend to be different characters as well so he can use his funny voices to be Trap Stilton while I am relegated to being Geronimo.  He then  runs up to me and says (in only what I imagine to be a bit of Jersey accent) “Hello Gerry Baby!”  He gets so very excited when he is acting and you can see it shinning in his eyes.

All this acting around the house is why we decided to put him into a drama class at Carousel Theatre.  He loves it (as far as I can tell) and looks forward to going every week.  He is very enthusiastic and like with anything else he does he gives little lectures about whatever he is interested in at the moment.  At the moment that could be anything from volcanoes, to transportation, to how a newspapaer room works.

I am sure Aidan speaks like no other five year old.  He has so many grown up turns of phrase that it is amazing.  Of course now that I am writing all about it so I can’t even remember one.  I think I really need to record him in the car so I can get these gems.

This entry was posted in Aidan, out of the mouthes of babes and tagged Acting, Drama, Geronimo Stilton, imagination. Bookmark the permalink.