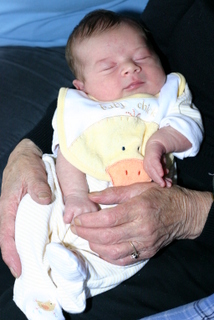 My grandmother is a force to be reckoned with and always has been. She is a little old Irish lady who always drummed to a different beat. My mother is the oldest of eight children and my youngest Aunt was only seven when I was born. I mention this because there were so many of my aunts and uncles still at home that I did not call my grandparents Nana and Papa, I called them Mom and Dad. I also had another set of grandparents and two sets of great grandparents so there was also not a lot of names left.

There are many stories about my grandmother Mom, like the fact that she did not get a driver’s licence until she was 40 (I think.) She could manage to take a short snooze and be missing to all 8 of her children. She was the life of the party and managed to flirt nicely with almost everyone. After my grandfather died she was a regular at O’Carroll’s, an Irish piano bar in downtown Halifax. She would bring us kids on long adventures that were really chances to get us to do a lot of blueberry picking for her.

We don’t know a whole lot about her early life in Dublin, and while she was close to some of her sisters, the move from Dublin to Canada was I think both a strain and a blessing. I know that my mom was 5 years old when she moved to Canada, and she and my uncle Paul (and maybe my uncle Peter) were the only ones born in Ireland. It must have been a really hard decision to pack up her family and move away from her mother and come to Canada. I am not quite sure how my grandparents met and I am not sure how much longer I have to find out.

I have some very distinct pictures of my grandmother in my head. The card playing, chain smoking Irish Catholic grandmother who is not afraid to shock people with her jokes. A woman who loves to garden and took up golf after my grandfather died to get out and walk more. As she got older my grandmother went out with younger people because people her own age bored her.

There is photograph of me that looks very much like my son Aidan’s baby pictures except that there is a shot of my grandmother’s hand in the picture. In it I am outside and about to bite a candy apple that is covered in dirt and the hand that is holding it out to me also has a cigarette that has an ash that is about an inch and a half long. No other part of the woman is visible but we know it is Mom for two reasons; for one the apple is full of dirt and there was no attempt to wash it off, and for the other there is the ever present cigarette.

When I was in university and O’carroll’s was still open I remember one St. Patrick’s day. I was sick as a dog and I was going to be performing that evening at a vocal recital at Dalhousie. I knew that my grandmother was going to be at O’Carroll’s because it was St. Paddy’s day and it was a Friday. I was old enough to go to bars and I decided to go and surprise Mom. She was really please and introduced me around to all her friends and had me do some singing. It was an interesting experience for me to watch the ease with which Mom interacted and flirted with all the young things in the bar. She was always in her element and I am not sure she ever had a tab to pay at the end of her evenings.

I am very far away from my family and sometimes, like now, it is very hard to be so far away. I am not sure how much longer my grandmother will be here with us. I am trying very hard not to be pessimistic, but with the amount of weight she has lost since Christmas and her problems with her lungs we are just not sure. Since she lives with my mother, and has since I moved out here to Vancouver, my mother is her primary caregiver. Just in the last year my mother has gone back to school and has done really well. Talking to her tonight I can hear how stressed she is about my grandmother. I have been thinking for about a week now that I really want to get back to see her. I am trying to figure out when is a good time and then I worry that if I wait until it is a good time for me that it will be too late. Then I beat myself up inside because I feel like I am sending the wrong kind of vibes back home to her. I am glad to know that Mom got to talk to her great-grandsons not long ago, but, I know that even that 7 minute phone call wore her out. I just don’t know.

This entry was posted in family. Bookmark the permalink.