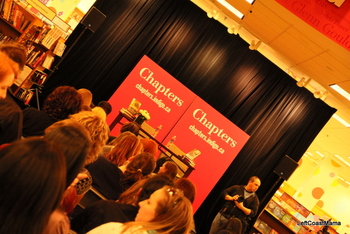 Waiting for Cassandra and Holly

On Monday night I went out to Chapters in Metrotown to hear Cassandra Clare and Holly Black read from their new books and answer some questions. I was hoping to get a chance to talk to them and get some of my books signed but there were a few things conspiring against me. The first was being a mom unwilling to hire a babysitter so that I could go and block out a spot at noon. The second was that as I was running late I didn’t bring all my books. I could have had all my Spiderwick Chronicles and Modern Faerie Tales, and my Mortal Instruments and Infernal Devices books signed, but as I was more interested in being able to see the presentation I would have been at the store until at least midnight. I Heard that Cassie and Holly stayed signing and chatting with their fans until half past midnight. 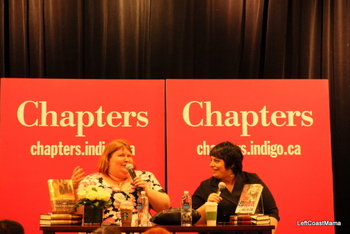 I recorded most of the reading and question period and I must say that I was so impressed. They were engaged and interactive with the audience and they answered dozens of questions. It is why I am so impressed with Holly and Cassie on twitter. Both authors answer and interact with their fans, but @cassieclare spends a lot of time tweeting with her fans. She has interesting discussions and answers questions and generally is a very good example of how authors can be a huge part of their own pr. In fact I knew about the reading event because Holly and Cassie tweeted about it and all of their book signings. 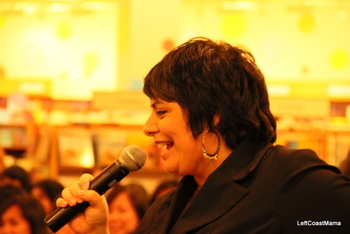 Holly Black Moving About the Crowd Getting Questions

I am also impressed at how comfortable they seemed with the audience, with themselves, and their fashion. Both Cassie Clare and Holly Black are bigger women like me and they were rocking clothes that suited them and their shoes were fabulous. I wish I knew where they shopped because I would totally wear what Holly is for the opera on the 30th.

I loved seeing so many teens getting so exited about meet these authors. It was as if some of them were meeting their rock star heroes and it was wonderful to see. The line ups around the store were huge but the staff was friendly and the parents seemed to be pretty jolly about having their kids get so excited about meeting their favourite authors. I know that I am excited to be taking Aidan to meet on of his favourite authors soon.  I hope we don’t make it to midnight, but if it happens I will be happy to help make a memory that he will never forget. 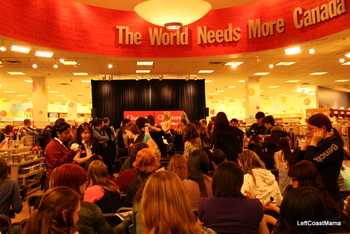 Gaggles of Teens Waiting to Meet Their Favourite Authors. 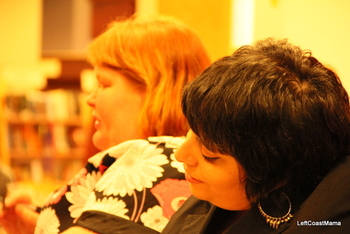 I have not read the latest in the Mortal Instruments, or the second curse workers series, but I am receiving review copies any day now, Yay! I am also going to be sending them interview questions through the publisher, and I am inviting you to send me any questions you may have as well.

When I got to the reading I was a little weirded out that I was one of the only older people there who didn’t have a son or daughter wanting to meet the authors. What I soon realized is that I enjoyed myself. Sometimes we just need to admit that doing something for ourselves is a good thing. I think next time I will try to get blogger/media status though, I think it would have been good for both Chapters and me.

If you have not read Cassandra Clare’s Mortal Instruments or Infernal Devices, I highly recommend them. I also recently read Holly Black’s Modern Faerie Tale series and I devoured it in one weekend. So go and read!