In late September I was invited to attend an event launching the new Safety First Air Protect car seat.  Since we were looking for something to replace Quinlan’s convertible car seat I thought why not and I went to the presentation, kids in tow.  It was an interesting look at how the car seat was conceived and what the testing process was like for this idea.  For while car seats are well tested for front and rear impact collisions, side impact is something which is only just beginning to be looked at.

At first glance the <air> is a little awkward looking and my husband’s first concern was how much Quinlan would be able to see from his seat.  With our first son we think this is a large part of the reason he hated riding in his rear facing car seat.  The two colour choices are nice enough and they hide stains fairly well (not that I would know this.)  We were given the two tone black and grey to test and it goes very well with our car’s grey interior.  We figured we would test the seat both rear facing and when we could safely turn it around for Quinlan, front facing.  We tested me putting it in the car both rear facing and front facing.  I made notes of what was easy and what was difficult.   We haven’t taken it on an airplane (something we do once a year or so) but it does seem to have a feature that would make that a little easier.  It can fit both the boys, but since we are concentrating on Quinlan being in the seat we have only explored that option with Aidan out of the car. 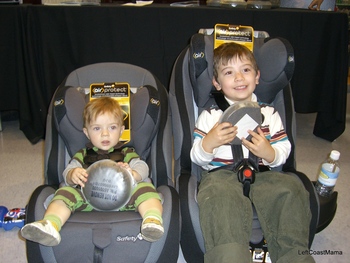 Aidan and Quinlan in the seats side by side.

So like any car seat there are things we like and things we don’t like about the Safety First Air Protect.  The biggest pluses for the <air> are the safety features.

The ability to keep this car seat rear facing until 40 pounds is really nice.  I know that we have moved our 14 month old to the front facing position, but if you are so inclined to keep your child rear facing longer is is possible.  I also know of a number of infants who are very sturdy and are at the height and weight restrictions much earlier than the baby buckets allow.  I know that Quinlan needed to be in a different rear facing seat other than the bucket much earlier because of his height.  Aidan as a much more solid infant might have been much more comfortable in his rear facing seat. 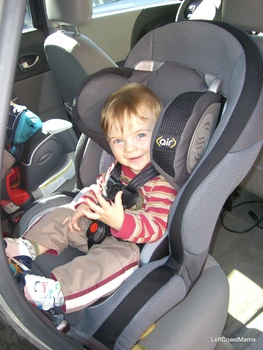 The five point harness is usable up to 50 pounds.  I really like that this seat is usable with the harness until your child is around 5 years (or more) old.  It is a lot more difficult to get out of the 5 point harness while you are driving than it is to unbuckle the seat belt.  I know that I have nightmares about this, especially having seen enough little kids do exactly this.

The side impact protection.  After watching some video of the side impact testing I am totally a convert.  Anything I can do to help protect my children from the forces which come in from a side impact are worth it.  The technology with the air cushions is relatively simple but also very effective.  They also form nice cushions for your child to lean against when if they fall asleep in the car.  I am very impressed that Quinlan no longer looks so uncomfortable when he falls asleep in the seat.

The latch system has much improved components from the Alpha Omega Elite convertible seat.  Instead of difficult to open clips, the clips on the <air> have a release button that makes them much more manageable. Although Anthony thought they were a bit finicky.

Some features that I liked were not safety related, but things that made the look, feel and overall usability better than some other seats.

The look, while not truly important, is something that we all notice.  The brown and orange, while not my favourite, would be nice and stain resistant.  The black and grey are pretty nice and would go with most interiors.

The removable back bolster and overall cushiness of the seat impressed me.  It may be that the seat Quinlan was using that was his older brother’s was very cushy at one point, but I don’t think it was nearly as soft as this one feels.  Since we like to go for drives and day trips it is important that the kids are comfortable.  It makes it much easier to get further. The back bolster is very useful for keeping the small bummed infants and toddlers in the middle of the seat.

The non-puzzle lock on the harness.  I cannot tell you how amazing it is not to have to try to put together the straps before putting them into the crotch clip.  It is so much easier to get the harness clipped in one side at a time especially when the wiggly baby turns into and even wigglier toddler.

It may seem like a small thing but there is a place on either side of the seat to clip in the latch clips.  When you are trying to load the carseat into the bag to be checked in at the airport, having a place to lock the clips in is genius.

Lastly, but my no means least, is the seat covers ability to be removed (well most of it) to be cleaned. If, like us, you have a child who has vomited in their car seat, the ability to take off the covers to wash are incredibly appealing.  Now while it was a bit of a pain, and I wasn’t really going to worry about taking off the seat cover, Quinlan thoughtfully puked over all but the <air> head cushions.  The subsequent clean up of the vomit didn’t take all that long and I am very glad that I took the time to take off as much of the cover as I could as it had leaked a lot further than I thought.  A quick surface wash wouldn’t have cut it.

I think that I was extremely lucky in that Quinlan didn’t puke on the head cushions because they cannot come off and would only be ably to be surface washed.  It is very hard to get the smell of vomit out of surfaces without giving them a full wash.  If there was a way to be able to take the cloth portion of the cover off and have a plastic cover that wouldn’t come off as to keep the <air> cushions where they are supposed to be to keep your child safe in a side impact collision, it would be a great improvement.  I would also like a way to take off the covers without having to take out the whole strap assembly.  I think that with velcro it might be possible to come up with a design that lets you remove the cover without taking out all the straps.  I found the disassembly and assembly to be time consuming and some parts very difficult, especially around the bottom of the seat and the plastic insert guides for the harness.  I think that as parents if it were easier to take the covers on and off they (the covers I mean, not the parents) would be cleaned much more often than they are.  Kids tend to be very messy and I know I am not the only one that has kids snacking in the car. 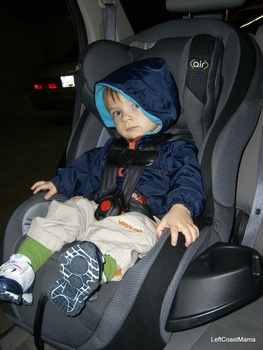 I find that the QuickFit harness system that is supposed to adjust the harness length with one easy step, isn’t as easy as it should be.  It is very hard to adjust when in the rear position because it is much harder to actually manoeuvre your fingers to the release toggle.  I also find that when I am making the daily adjustment the harness gets a bit stuck at times.  Sometimes it is easier than others.  I am not sure how this could be fixed, but it bears mentioning.

Gwen using all her might to get the latch tightened properly.

You shouldn’t need to be incredibly strong to install the seat properly.  I had more problems getting the latch system tight enough in the rear  facing position and I needed to undo it and put a rolled towel under the front to get it to the proper level.  This made it even more difficult to get the latch tightened properly.  I fought with it for more than half an hour before I gave up and got my husband to help me.  I am not a delicate person by any means and I am quite strong, but it was very hard.  I think that there are a couple of things that would make this easier. The first is adding a little bit of length to the latch straps.  If you can use a little more length and leverage it should be easier to tighten.  Even better a ratchet system that you just turn would be ideal, then your own strength wouldn’t matter as you  would be using mechanical advantage. It would also be nice to have something that you could flip out in the front to get the level correct in most of the SUV sloping back seats.  Lets face it there are more people, especially those with children that have SUVs or Mini Vans and the rear facing mode is never the correct level.

Overall I am very impressed with the Safety First <Air> Protect car seat’s safety features, but I think that some of the other features could be improved.  I would love a hybrid of the <Air> and the Graco Nautilus.  I would be very happy to have the <Air> be a little bit skinnier so we might actually be able to get a small person in between the two seats. I also love the recessed in arm cubbies and the in arm cup holder of the Nautilus.  If the <Air> had these as well it would be the best seat we have seen so far.  It is a pretty reasonable price  at 299 and can be found at BabiesRUs.  It is one of the few car seats that launched at the same time both in Canada and the US, so you can get the seat now.

Now to the disclosure statement.  I was not paid to write this post though I did receive an <Air> Protect car seat to use.  I have tried to get a firm idea from the PR firm as to whether I was able to keep the seat or not.  Since at this point I have still not heard I am assuming the seat is mine to keep.  (This may be because of the fact that while cleaned it did get christened by vomit.)  I also tried to get a seat to give away to one of my readers, but also at this time I haven’t received word if that is even a possibility at this point.  If there is a chance in the future to give one away I will.  Anthony will also be publishing (at some point) his own review of the car seat.  When he does I will link to his review here as well.