There was an explosion on Broadway this morning on a block where we are all the time, although never (well hardly ever) at 2:30 in the morning. Anthony wrote a post with a pictures on Left Coast Floyds this morning. We also got a really weird comment on that post, and I posted about it there. After all that posting since it was (and still is) sunny Aidan and I went down to see how close we could get to take some pictures. I didn’t expect to be able to get too close because Broadway was supposed to be closed from Willow to Cambie until at least noon today. To my surprise they had opened all but 2 lanes. Vancouver engineering must have been really working hard. So we gawked and took pictures. 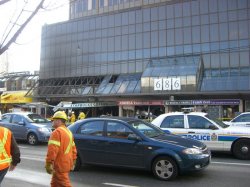 Our first look at the Starbucks on Broadway. I was really surprised that we were able to get so close. 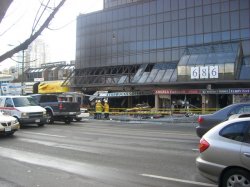 A better look at the damage. 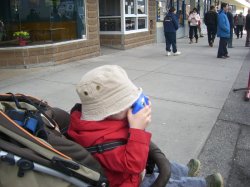 Aidan was taking pictures too. I think we got a few of the newspaper box. 🙂 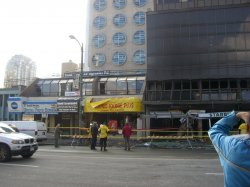 More of the damage to the surrounding businesses. 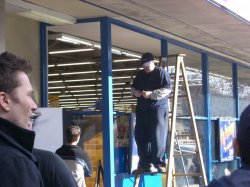 Some of the damage across the street at London Drugs. It was actually open at this point and quite busy. 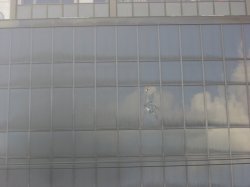 Several floors above the Starbucks. 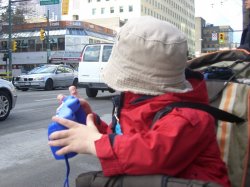 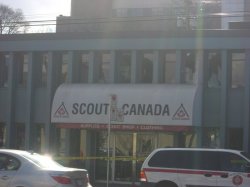 Shattered windows above the Scouts Canada store. A place I walk by almost daily. 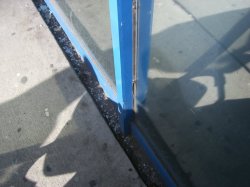 Anyone want some shattered glass? London Drugs has tons outside their store. 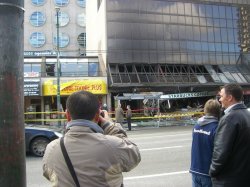 Another view of the damage. 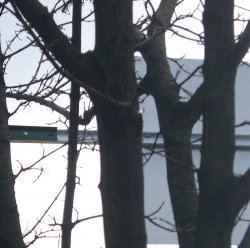 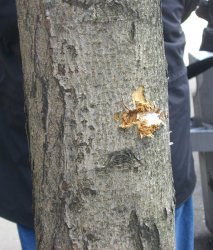 Looking at these 2 pictures of the tree and the glass stuck in it, it is much easier to see why it is amazing that no one was hurt. If there had been anyone on the street at this time they would have been seriously injured. 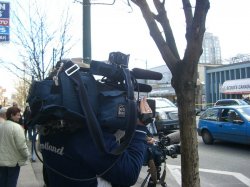 I wasn’t the only one who thought that the tree was interesting. There were a lot of news cameras of all types there. One camera man in particular spent a bit of time filming Aidan looking at the glass stuck in the tree. When the camera man asked Aidan what he thought of it, Aidan replied “It is terrific!” 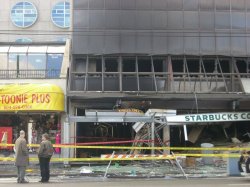 I am assuming that these men are investigators. 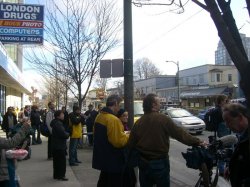 More of the gawkers. It was quite a spectacle. I am sure that like me a lot of these people are around here all the time (well not the camera crews) and wanted to see the wreckage. I still can’t believe that this happened. I’ll just bet that Starbucks is glad they just turned the old Dairy Queen 2 blocks down into a new Starbucks. Can’t have all that business go to Blenz. 🙂

I will try to post some of the pictures from Aidan’s camera later. They provide an interesting perspective.

This entry was posted in Aidan, Police Incidents, Starbucks, Vancouver. Bookmark the permalink.

1 Response to Big Booms and Crazies