Yesterday was the best Halloween ever. I was hoping to get Aidan a little trick or treat practice at a local mall but I guess that the malls weren’t cooperating and had all their Halloween activities on the Saturday past. Oh well, so we bundled up and went out for a walk down to Granville Island to take some pictures. Aidan decided that he liked the wings I made for me and wanted to wear them so WTH I let him and he made a very cute winged monkey. 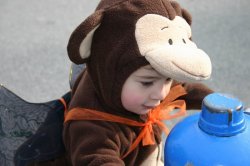 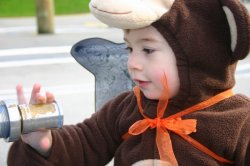 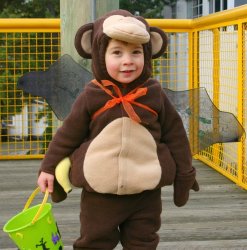 I was very worried that with Aidan’s imagination that the trick-or-treating aspect would be very short. I think I was right to worry because we had a bad start. I have a friend who lives in the coop housing right by False Creek Elementary school and it is the place to go trick-or-treating. Most of the places right around our townhouses are not full of kids so there are not a lot of places to actually get candy on Halloween. We decided to bring some candy to Joanne’s and do some trick-or-treating in her complex. (It also gave us a place to go if things didn’t go well with Aidan and a place to leave the stroller.) The only problem was that the place next door had a Halloween scary sounds cd. Aidan really didn’t like the “spooky” (his word, not mine) music. We tried to get him to knock on a few doors close by but he was still upset and would go to any place that had a pumpkin or any sort of decoration. 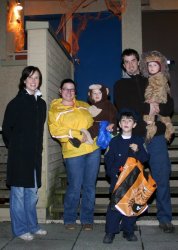 In both of these pictures taken in front of Joanne’s place, Aidan is very worried about the music. 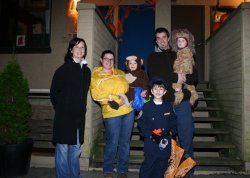 Frankly we were about to give up when he did go to a house that was well lit and had very little decoration. When Aidan realized that he got to knock on the door (“knock knock” he said every time as he knocked) and got chocolate he decided to try a few more doors. He then started to really get into it and was smiling and going up and down the stairs, knocking on doors, saying “trick-or-treat” and “thank you” and even asking for more at a few places. (Cheeky little monkey!) Aidan and I decorated a little bucket to put his treats in and I brought a cloth bag to dump the candy in when it started to get full. He got great joy in bringing the bucket to Daddy to dump the candy in the bag. I think in the end we went to about 50 or so houses and Aidan had a blast. 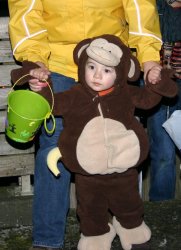 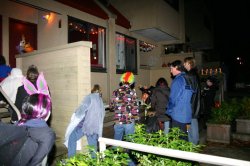 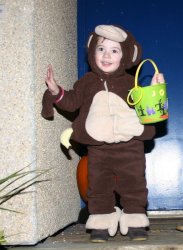 I think the best line of the night was “Aidan likes chocolate!” And so he does. He asked for some for breakfast this morning. 🙂 I gave him a couple of smarties and his cheerios. What the heck, it was his first real Halloween.

This entry was posted in Aidan, Halloween, Trick-or-treating. Bookmark the permalink.