I guess you could say that like most of my weekends this one was nothing too out of the ordinary. Friday night filled with “Take Home Chef” and “What Not to Wear” on TLC. Saturday filled with “Flutag,” sunburns, video games and cards. Sunday filled with two sickies.

It seems as soon as Aidan gets a cold the next day Anthony has it as well. I am not really sure what to make of this. It is a little annoying but there is not much we can do. Anthony will almost never take time off when he is sick so he stays sick longer and on the weekends he is pooped. Both of them are getting better but as with any cold they seem to linger for a long time. This one seems much longer since it came only 3 weeks after the beginning of the last one.

Friday I managed to get a couple of cute pictures of the kids. Aidan and T. sitting on their matching chairs. 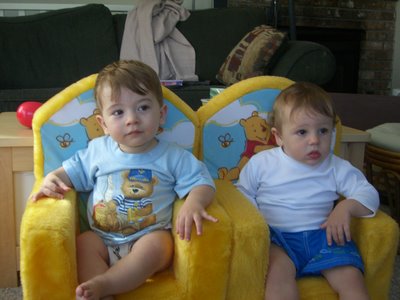 Aidan sitting like a “big boy” after nearly giving his mother a heart attack. He has taken to climbing on anything that he possibly can. 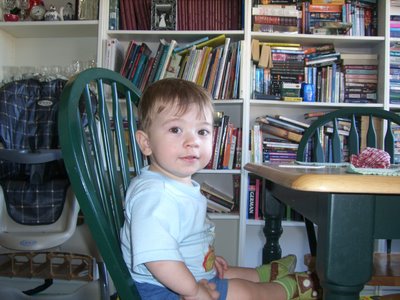 On Saturday we went to see the Flutag (Flying Day) sponsored by Red Bull. We went with our friends Tomer and Carla and we found a pretty good spot to watch the first few. It was pretty shady and Aidan took the time to suck up to Carla. I swear he is an opportunistic little devil. 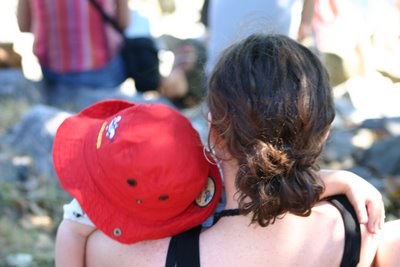 The flying machines were pretty silly and most of them didn’t make it very far. This one was still in first place when we left. 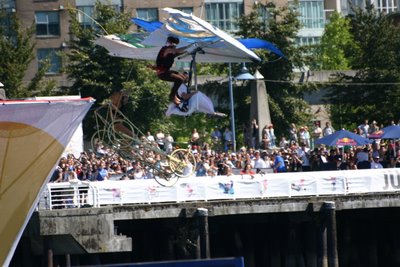 When we got home we decided to extend the day and Carla and Tomer stayed for supper. A nice corn on the cob, nugget potatoes and green beans for Carla and that plus some good steak for the rest of us. While we were preparing supper the boys were able to get some video game time in on the x-box. NHL hockey anyone? Aidan had at least three controllers trying to find one that would actually let him play. I am thinking that we will need a game system for him very soon. (Ok we will play too, but it will be mostly his.) Carla managed to get a nice picture of the boys playing. 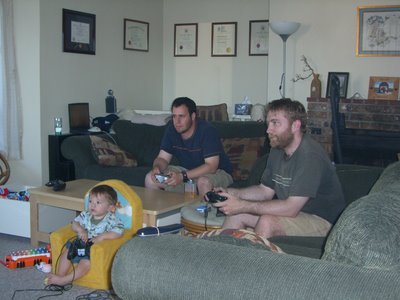 After supper we got Aidan down to bed and then played the weirdest game of wizards ever. I swear that in the first game Anthony had crap and got way too many tricks for the hands that he had. In the second game I was under 50 until the very end because he had passed the luck my way. There was a hand where I had 2 wizards and a bunch of trump and still managed not to get the right amount of tricks.

Sunday we made a lazy day. Aidan was pretty cranky and Anthony needed a day of rest to get back to work on Monday. I was a bit cranky too, but Anthony really did need the time and he rescued me when I reached the end of my rope.

Now that I have the weekend up I might have to do a week update. 🙂